What is a buffer?

A buffer is something that reduces the shock of contact. A mediator is a buffer for people in conflict. An airbag is a buffer that cushions the impact of a crash. Likewise, the land running along the water’s edge is a buffer against the impact of development on a water body. People apply the term buffer to landscapes with different characteristics, ranging from naturally vegetated, undisturbed areas to those where mowing is allowed. The BOB project uses the following definition:

A buffer is a naturally vegetated segment of land directly upslope of a water resource, such as a lake, stream, river, pond, estuary, or other wetland type.

This definition offers a uniform way of analyzing information from diverse disciplines, encompasses landscapes that support the range of benefits buffers provide, and is consistent with New Hampshire’s regulatory framework. (Read more about defining buffers in BOB’s coastal science literature review.) People often apply other terms to this definition, however, including vegetated filter strip, riparian area, setback, and jurisdictional zone. The latter two terms have distinct legal meanings and it causes confusion when they are used interchangeably with buffer.

A buffer is a naturally vegetated area. A setback is a specified distance from a water body within which certain activities are restricted. A jurisdictional zone is an area adjacent a water body over which a governing agency has regulatory authority.

CLICK HERE for the interactive version of the Conceptual Model to help support mutual understanding and communication around buffers. 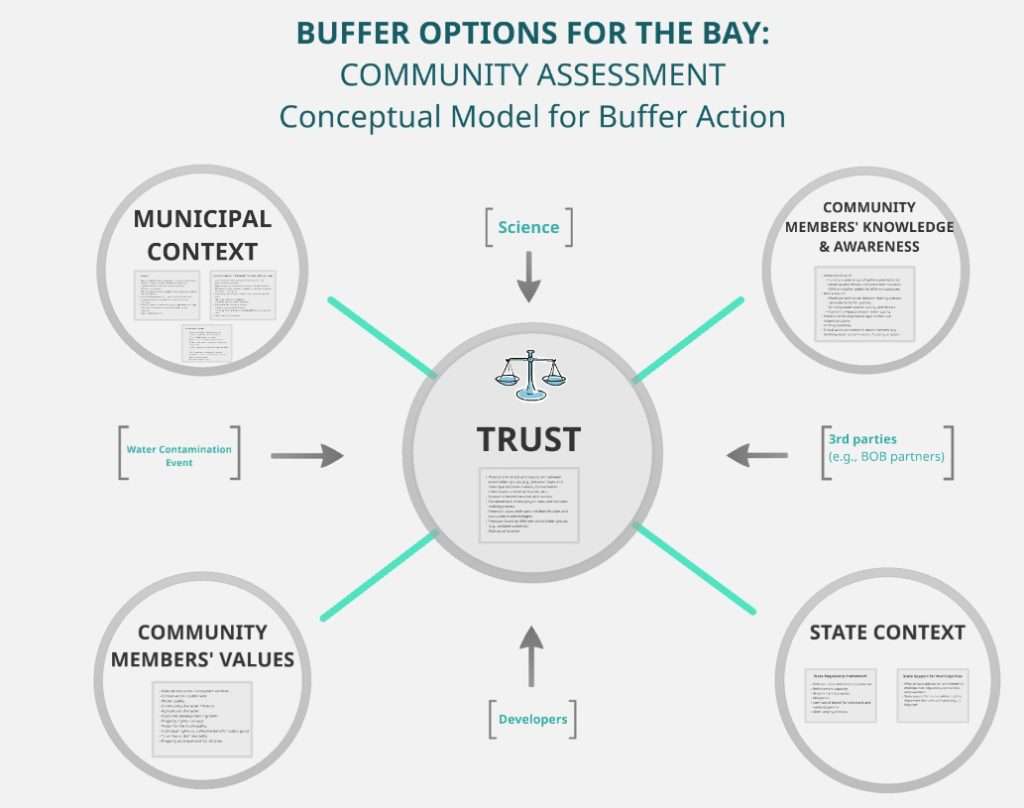 What do they do?

Healthy, intact buffers help keep our waters clean and our basements dry, offer a home for wildlife,  and protect oyster beds and eelgrass. They provide all of these benefits and more by moderating some of the major stressors on the health of our region’s water bodies. These include decreasing water quality, rising sea levels and extreme storms, and loss of habitat. Healthy, intact buffers mitigate these stressors to sustain the following benefits for people and communities: 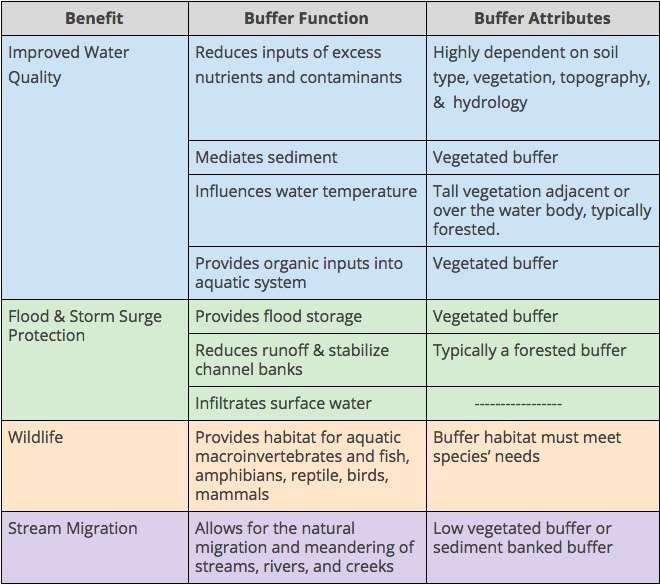 How well do they work?

A buffer’s effectiveness depends primarily on its characteristics—width, vegetation, slope, and underlying soils—and the surrounding landscape adjacent to the buffer and in the larger watershed. Landscape context is particularly influential on a buffer’s ability to intercept nitrogen in runoff, a significant consideration for buffers near large areas of development.

Given the wide range of factors that influence a buffer’s effectiveness, it’s not too surprising that published science on this subject is nuanced in New Hampshire and elsewhere. While it is clear that buffers help protect many of the benefits that Great Bay and its tributaries provide, their capacity to do so is difficult to study in a controlled way.

A buffer’s width, arguably the attribute of greatest importance to all stakeholders, has received considerable attention. While many studies make recommendations for buffer width, these often relate to the width necessary to maintain ecological features or functions found in entirely natural landscapes, such as an assemblage of forest-associated birds. Such relatively wide margins of land may not be practical, or even feasible, in some settings. Relatively few studies have focused on the topic of narrower buffers, which may be the only option is some cases, with the exception of research on nutrient removal.

When larger buffer widths are not feasible, it is especially important to identify opportunities to enhance the quality of the buffer through, for example, restoration.

As a result of the limited data on narrower buffers, BOB’s coastal science literature review puts forward the following minimum buffer width recommendations based on what is necessary for buffers to support a particular benefit, with the caveat that we do not always fully understand how well narrower buffers may function. We also must acknowledge that variable width buffers can provide an important tool for meeting an ecosystem service target where it is infeasible to maintain or restore a fixed width buffer as a result of adjacent land use, site and stream conditions, and other factors.

These widths are a result of a synthesis of many sources. For more specific information about how these widths were generated, please reference the Coastal Science Literature Review.

How do we value buffers?

The value of a buffer is tied to the benefits it provides, and in a sense, these benefits are in the eye of the beholder. A hunter might highly value an intact, wooded buffer for its capacity to support wildlife, while a homeowner might view the same land as more valuable if it were landscaped to enhance water view. A developer could put a high premium on buffers around coastal wetlands for their development potential, while a municipality might regard the same lands as “natural infrastructure” that must remain undisturbed to help meet water quality standards.

However, while perspectives among individuals vary, there are commonly held values that relate to efforts to conserve, restore, or manage buffers and understanding these is a critical first step to working toward enhancing buffer protection. BOB’s assessment of community perspectives in the Exeter-Squamscott subwatershed identified common values and perspectives among decision-makers and other stakeholders.

When exploring how people express their values, it’s useful to think about the choices they will make. One way to quantify these choices is to look at how people spend money. The BOB project team invested in two efforts to explore the benefits and costs of buffers can be quantified economically—an economic literature review related to buffers and an economic study to quantify what people in the Great Bay area would be willing to pay for cleaner water.

The economic literature review found that the benefits provided by buffers, in particular water quality improvements, can increase property values by as high as a 30%, but that buffers also may contribute to lost development opportunities and degraded views that can reduce economic benefits. The review also examined the opportunity, acquisition, transaction and management costs associated with buffers. It also found that costs to waterfront landowners is higher when buffer development is restricted, whereas the water quality benefits are spread over thousands of people who live in the watershed. This touches on a key aspect of any assessment of public policy—can or should the decisions of individuals be limited to provide societal benefits?

Willingness to Pay for Choices

Benefits provided by buffers are sometimes ignored because they are not bought and sold through formal markets. How do we determine how valuable they are to people in New Hampshire? Benefit transfer is one method of quantifying their economic value using research results at one or more study sites to predict economic values at other sites.

The BOB team conducted a water quality benefit transfer study that estimated per household willingness to pay (WTP) for standards of water quality that affect a variety of ecosystem services, including aquatic life support and recreational use. WTP is the amount of money a household would be willing to give up—for example in taxes or fees—to prevent a loss of a benefit or for a specified gain. The study focused on the Great Bay Estuary (not including tributaries) and the freshwater and tidal portions of the Exeter-Squamscott River and generated WTP to maintain current water quality levels and to obtain a range of water quality improvements.

The study found that annual household WTP increases as the size of the water quality improvement increases for all focal water bodies. Annual household WTP was greater ($62-$85) for improvements to the Great Bay than for improvements to one of the tributaries ($39-$54). When these household values are adjusted for the entire region, the aggregate WTP for water quality improvements for the seven communities that surround Great Bay would be $1.5–$2.8 million dollars annually (2016 dollars). When the analysis was extended to Strafford and Rockingham counties, the annual willingness to pay jumps to $9.5-$17.1 million.

Are buffers a good deal for communities?

Another way to look at the value of buffers is to assess how they reduce costs of water treatment, restoration, or impact mitigation. Research has shown that the effectiveness of green infrastructure (natural areas like buffers that provide ecosystem services) in reducing pollution is not only comparable to that achieved by gray infrastructure (e.g., constructed stormwater interventions), but that green infrastructure typically costs markedly less.

For example, as watersheds have degraded, costs for traditional water treatment have doubled for roughly one in three large cities globally. By using green infrastructure, communities can not only avoid watershed degradation, they can maintain water quality and reduce treatment costs. The largely intact floodplains and wetlands within Vermont’s Otter Creek watershed were estimated to have reduced damage 54 to 78% across ten flood events for the town of Middlebury and by 84 to 95% in the wake of Tropical Storm Irene. The annual value of these flood mitigation services exceeded $126,000 and may be as high as $450,000.

The cost avoidance afforded by green infrastructure also extends to the construction of wastewater treatment systems. One study found that using constructed wetlands costs around $5 per gallon of capacity compared to approximately $10 per gallon of capacity for a conventional advanced treatment facility. Green infrastructure also functions better than gray infrastructure in climate adaptation and resilience by providing a suite of co-benefits, such as improving air quality, reducing urban heat effects, lowering energy demand, and even increasing land values by up to 30 percent.

For more information on the economic benefits of buffers, see BOB’s review of relevant economic literature.